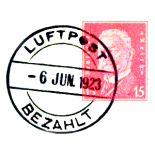 At the mosque, attending Friday’s sermon

A letter from Turkey. In which is given the eye-witness account of the traditional Friday rituals in an Muslim house of prayer.

you know quite well that to me travelling always was about curiosity. Curiosity and respect. The will to get involved into culture and everyday life of the countries one is visiting. Going somewhere foreign should leave more than those impressions one could get by browsing a glossy coffee-table book (which can have a quality of their own, don’t get me wrong) always has been one of my principles. 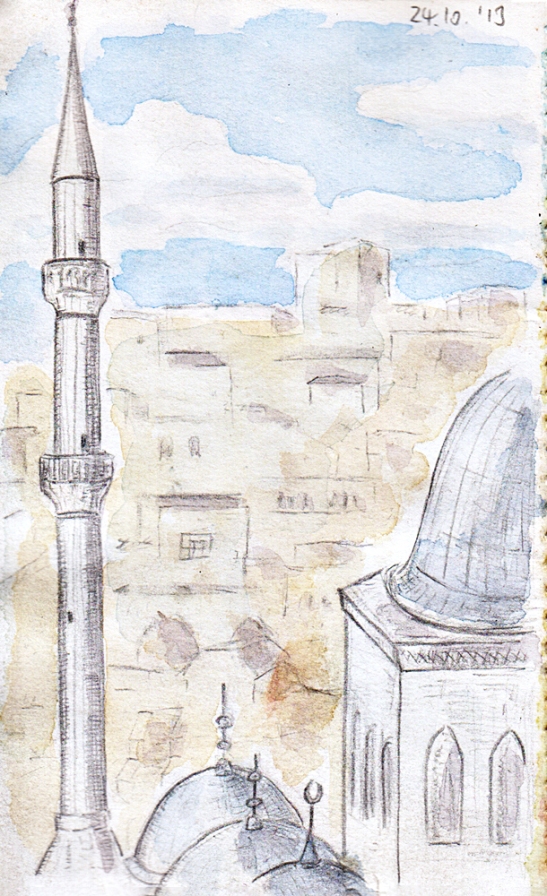 Entering the East (‘Orient’ right in its original meaning), the curious traveller will be confronted with its peculiar customs and character sooner or later: minarets, the muezzin’s call to prayer, bearded men and veiled women.

Most of us (even, or rather: in particular those not travelling) have a certain picture of the ‘Muslim World’ in mind (which can seem so exotic and alien). Colourful images from romantic adventure tales or darker tones fuelled by excessively negative news coverage, a diffuse feeling of strangeness and – sometimes even menace. Embarrassed I’ve got to admit, I am not free of such sentiments myself. But as I told you, I’m also overly curious. And since we mostly only feel uncomfortable with those things we don’t know, there is no better way to overcome prejudices than facing them. So, I thought to invite you to follow me into a mosque in south-eastern Anatolia with this letter – right there at praying time on a Friday noon.

It all started with the desire to visit Urfa’s ‘Ulu Cami’ (the Great Mosque) which I passed so many times without ever taking a moment to have a closer look inside. Well, to be honest, actually I intended trying to crest the nearby tower, obviously not a minaret but more resembling a bell tower in Byzantine tradition. Which it actually is (and although it’s modern added clock is not really going true, the bell’s are working again – this year for the first time, much to my surprise as you might imagine). 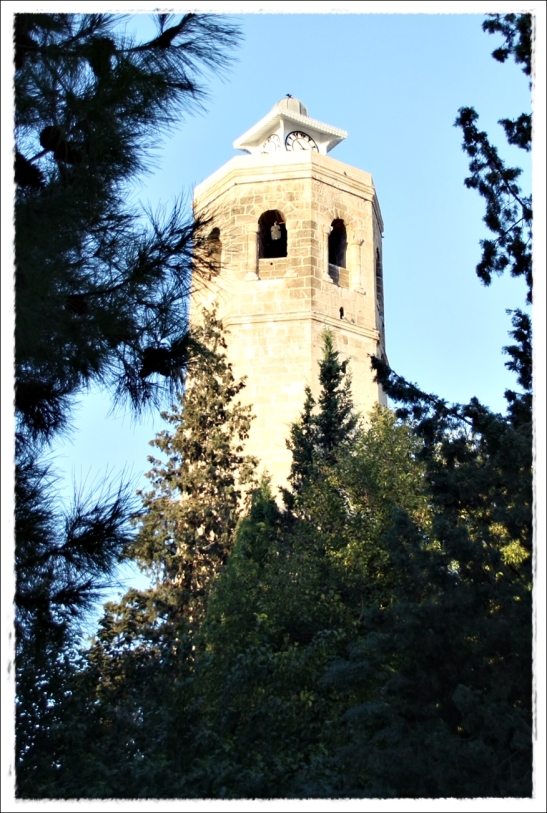 Anyway, I was thinking the view from up there upon the narrow old town alleyways must be fantastic. Of course, the door was locked. So I approached one of the locals sitting nearby, asking for somebody who might know about the accessibility of that tower and I was helpfully directed to the Hodja who was – apparently – preparing for the upcoming sermon. Kindly greeting and welcoming me, he listened to my concern which I tried to put forward with my rather limited knowledge of Turkish (did I ever told you that it goes a bit better by now, those lessons really had some effect). He understood. And kindly but deeply regretted that it was impossible to enter the tower. To reduce the disappointment he invited me to visit the mosque instead. Well, that was an invitation I accepted gladly as you surely would have imagined already. 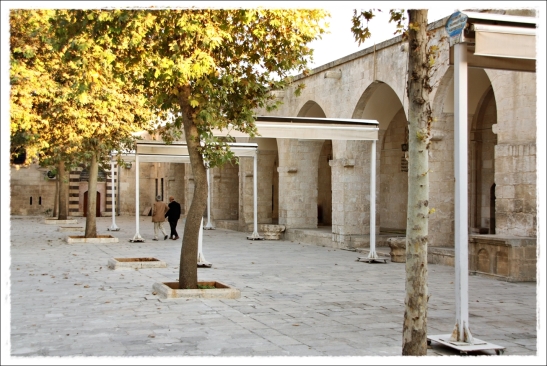 The house of prayer presented a rather frugal but bright interior. Rib vaults, archways, and in particular the arrangement into three naves immediately reminded me of the old church which once was situated right here (and of which the bell tower as well as some pillars’ capitals still give witness). But, as I found out later, this was not much more than a trick my imagination played on me. The whole building as it appears today apparently was constructed from scratch and as mosque in the 12th century – constructed on the foundation walls of said church, though. The concept of the twelve vaulted halls in the anteroom which are supporting the cross vault is said to have been used here in Urfa for the first time in all of Turkey. The well in the courtyard is deemed holy ever since a picture of Jesus once fell into it (I think this is somehow related to the famous ‘Mandylion’, which was kept in Edessa – you probably heard of that legend). 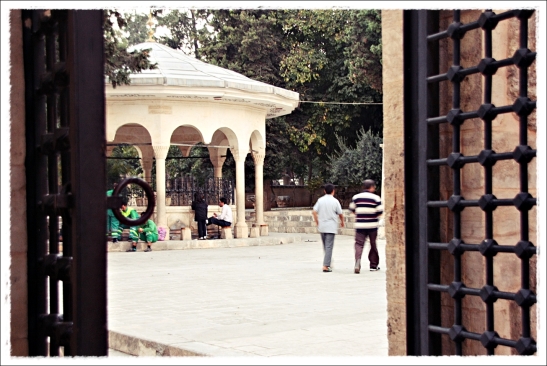 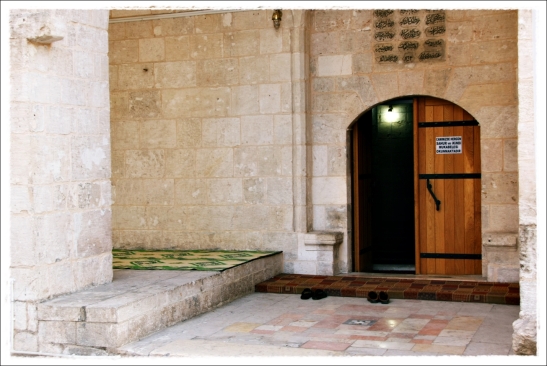 The prayer room’s still empty as I enter. Two elderly men, engrossed in conversation, are greeting with a nod as I pass, in the back two other men are busy murmuring reciting suras. After having a look around I decide to spend some time waiting in the forecourt to attend the much-quoted Friday’s sermon and prayer. My curiosity was piqued, I am telling you.

It still took some time, but then the first groups of older men appeared on the scene (interestingly enough this shouldn’t change much – at least here and today the audience mostly consisted of old men, younger people attending the service remained rare). They are greeting each other extensively before settling at the well in the centre of the courtyard to thoroughly wash their hands, feet and faces – as the ritual requires.

Now the mosque is filling; little by little the men are entering the hall (the women’s area is separated and of course I didn’t even think of entering there) – shoes taken off at the entrance are parked neatly in shelves.

With the call to prayer, the room’s finally filling completely. Latecomers are looking for space in the rear, where I came to rest as well. After consciously pausing for a moment and the necessary obeisance, everyone is trying to find a comfortable position as it is about time to listen to the sermon (and as in probably every divine service around the world, not everyone succeeds in staying the course with undivided attention). 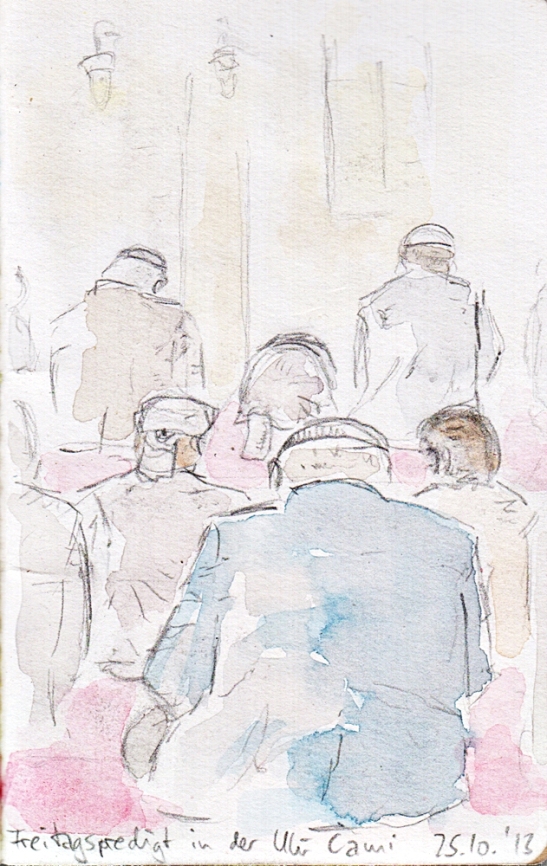 More impressing is the joint prayer thereafter. Suddenly, the crowd begins to stir! Everyone’s making an effort to align in exact rows. At least two suras are cited (if I counted correctly), interrupted only by bowing and prostrating several times when the grandeur of God (“Allahu akbar” – literally rather: God is greater (than anything else)) is proclaimed. Another last prostration and short moment of silence, then the community of believers is dissolving. While a few individuals are still remaining, pausing and contemplating, the mass is flowing toward the exits (of course not without taking their shoes from the shelves first). I do as they do and leave, aware of just have witnessed an average part of everyday life.

And a quite fascinating experience it was, I can assure you. I really hope, you found this little report of my ‘participant observation’ as interesting as it was meant to question the stereotypes I had (I mean, how could I ever think about discussing Islam without actually having had a look into it’s meaning, rituals, and people?). Next time, I am pretty sure, I will have to tell you a bit more about country and people again. We will see, or – as they use to say over here: Inshallah. 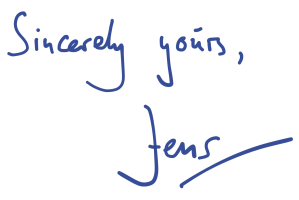 3 comments on “At the mosque, attending Friday’s sermon”

This entry was posted on November 15, 2013 by Jens in Cultural Anthropology and tagged Islam, participant observation, prayer, religion, stereotypes, Turkey.