A letter from Greenland. In which is described in detail a kayak adventure, including some Viking settlements.

finally I found the time to write again. I need to start this letter with a bit of a history lesson, I hope you don’t mind. But it will be a rather interesting lesson, I promise. I mean … it has Vikings and all!

So … when Erik the Red (who was called Eiríkr hinn rauði in Old Norse; well, actually Eiríkr Þorvaldsson (950 – 1003)), that Norse-Icelandic voyager and notorious Viking, was outlawed for manslaughter by the Icelandic Thing around 982 A.D. (not unlike his father who was banished from Norway for the same reason many years before, must’ve been a family tradition I guess), he set sail to a mysterious little known land in the west. In contrast to popular belief, he didn’t discover the shores of what he might have known under the name of Gunnbjarnarsker (which translates as ‘Gunnbjörn’s skerries’ – I’m just adding this as I’m not sure how good your Old Norse still is my friend) – a number of islands sighted by 10th-century Norseman Gunnbjörn Ulfsson, but he was the first European to establish a permanent settlement (after an earlier attempt by his fellow-countryman Snæbjörn Galti a few years before failed tragically) at this far-away land he called ‘Greenland’ in order to attract the interest of as many settlers he could get.

Well, as you now see we decided to follow these Viking trails and explore the coast and vicinity of their Eystribyggð (the ‘Eastern Settlement’) by kayak. Three weeks and a summer of ice – how does that sound?

Our journey to Greenland (which is physiographically part of the North American Arctic, but politically an autonomous country within the Kingdom of Denmark) began in Copenhagen, Denmark (well, technically, it already started when we left Berlin, covering the distance to the Danish capital by coach and ferry – but you certainly would bother to read the record of a bus journey, would you). After a short and not exactly comfortable night at the airport, we could finally enjoy the hospitality aboard that Air Greenland flight directly from Copenhagen to Narsarsuaq in Greenland. The airport of Narsarsuaq (by the way listed as one of the ‘world’s most dangerous airports’ in the web – I’m glad no one did point this out to me in advance) plays an important role as international hub for southern Greenland which seems a bit surprising given the settlement’s small size (with only about 150 inhabitants, go figure). But learning about the history and strategic meaning of that airport (which was first established as US Army Air Base under the code name of Bluie West One in 1941 – a small but quite interesting museum on location tells of this story), that peculiar role definitely becomes more clear and comprehensible.

Ah, I can hear you sigh; I am digressing again, don’t I? Now, to save weight and make transportation easier, we decided to rent the boats ‘on location’ where we got some great and steady Prijon Excursion kayaks. However, due to some heavy ice (now, if that wasn’t a good omen …) we had to wait one or two days to finally get hold of those boats, so we decided to start exploring the hinterland for the moment – the beautiful flower-decked Blomsterdalen (yes, you probably assumed right: ‘Valley of Flowers’) and the nearby ice sheet. A breathtaking view, I’m telling you! Earlier from the plane, this white cold desert already looked endless and impenetrable, the small stripe of fertile lands almost indeterminable. But strolling around, we found ourselves among a vernal scenery – pasture, flowers and … even more flowers. The valley really lived up to its name.  It was not difficult to sense, we were close to the inland ice even before seeing it as the air grew colder noticeably, and a river of milky glacier water came down from the hills. And right there, behind one peak or another, suddenly the mighty ice shield popped through – opening up widely to the horizon. It’s not at all easy to put this into words, you really should have seen it for yourself! A breathtaking view.

When we finally got our boats, there was no holding back anymore. Of course there wasn’t. Eagerly we were packing our stuff, squeezing it into the surprisingly ample stowage, bow and stern, of the ‘Excursions’, and – again, finally – casting off. Into the ice. Naturally, the coast of Greenland is sparsely populated. Plenty of wonderful solitude to drift through. Infinite scenery, ice, water, and only three things to really care about: finding a good (i.e. shallow) shore to disembark, finding a proper (i.e. flat) spot to make camp, and finding fresh (i.e. drinkable) water. Sometimes, life can be really easy, wouldn’t you agree? Of course, making our way along Tunulliarfik Fjord and back through the Igalikup Kangerlua, we also stumbled upon the traces of modern civilization in the area as well. I mean it’s not really like the end of the world. Well, not always.

We first became acquainted with the typical Greenlandic timber houses in Narsaq – although a rather small fishing town at first glance, one of the larger settlements in southern Greenland, taking up almost the whole plain at this small peninsula flanked by the ice fjord to its north. The larger colonial harbour, naturally playing an important role in the village’s economy based on fisheries and fish processing is catching the eye (guess what, Greenland’s only slaughterhouse for sheep is also situated in Narsaq and an important employer … oh, and it also used to have a brewery, making some pretty decent beer with glacier water – you probably know me well enough to draw your own conclusions fromm this discovery).

Most of the rest of the settlement consists of a manageable amount of wooden houses (like church, police station, and a supermarket), uniform only at a glimpse – painted in different bright colours. Originally, you probably will enjoy this thought, there might have been some logic meaning behind this colouring (yellow for the hospital and other public buildings, red for stores and crafts, blue for private houses), but in the meantime this does not seem to play much of a role anymore, the houses’ colours mostly just reflecting their residents’ liking now, I guess.

Well, it took two more days of paddling further south until we reached Qaqortoq, with a population of about 3,000 people the fourth-largest town of all of Greenland, presenting the – go figure! – oldest and (as far as I’m aware of) to that date only fountain in the country, which made it a well-visited tourist attraction.

Later again, with reaching Igaliku we were right back on track of our Viking friends. If you are looking for that small shepherd’s village, situated right at the end of the Igaliku Fjord, at one of your historic maps look for it under the name of Garðar as it was called when it used to be the bishop’s see of these Norse settlements in Greenland – the first bishop, arriving in 1126, immediately starting with the construction of a cathedral. Of course, today only the cross-shaped stone foundations of this chapel, excavated in the 1920s by a Danish colleague by the way, remained together with a few other ruins of the former settlement. But it added well to those other traces of Norse activity in the area we discovered earlier when making our path along and beyond Eriksfjord (Tunulliarfik in the modern maps): like the turf-covered outlines of single houses of Erik-den-Rødes-Land and in particular the ruined building of Hvalsø Kirke (the church of Hvalsey) at Qaqortukulooq. This church plays an important role in the history of this ‘Eastern Settlement’ in particular since with a marriage recorded there in September 1408 it represents the very last document before contact to the settlers was lost completely. 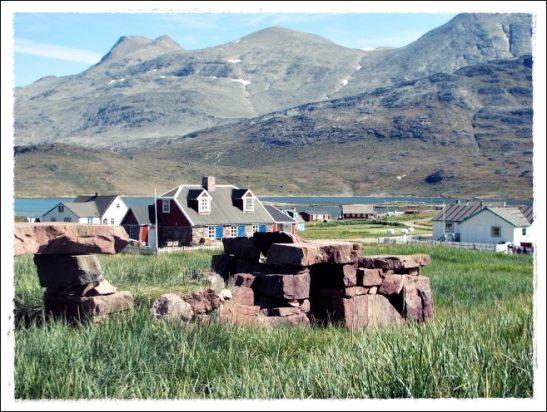 So, a bit anticlimactic I have to admit, we continued our way from the end of Norse activity in the area to its very origin by finally approaching the present settlement of Qassiarsuk at the shore of Eiriksfjord opposite of Narsarsuaq – you remember?, right where we started the tour. The small present-day village with a population of less than 100 people marks the location where Erik the Red established his farmstead Brattahlíð at the end of the 10th century. While some of the buildings reportedly still stood in the 1940s when the Air Base at the opposing shore was established, today only some depressions and banks in the ground hint at the ancient settlement. However, a modern replica of the Viking’s low, almost windowless and turf isolated longhouse gives witness of the original situation and living conditions back then. So does the reconstruction of a small chapel: Þjóðhildarkirkja (Thjodhild’s church) is considered – let that sink in for a moment! – the first church ever built in the New World. Thjodhild, Erik’s wife, is said to have converted to Christianity (in contrast to her  rather reluctant husband, according to the old sagas) when her son Leif returned from Norway in company of a priest sent by the Norwegian king. A sharper pen than mine might assume this was the reason why the monument in honour of Leifr Eiríksson is much, much more impressive than the one erected to remember of Erik. Well, to be fair, after all it was ‘Lucky’ Leif who is said to have sailed to Vinland and thus ‘discovered’ North America – well, you know the story, of course.

We did not plan to extend our little kayaking tour on Viking tracks that much, so with leaving Qassiarsuk it was also about time to bring our paddling adventure gradually to an end. Of course, you may have guessed that we couldn’t part with Greenland just so quickly. A short but steep hike up to the ice sheet and its calving glaciers – the place where icebergs are born – had to complete the experience the following four days, before our final day of departure. And while we were lucky to experience the Greenlandic weather from its best side during all the weeks of paddling under a sunny blue sky, these last days could show us the other face of Arctic summer: surrounded by rain clouds and impenetrable mist we’ve got to make our path through boulders and rocks – catching a glimpse at the world around and below us for moments only. Almost felt as if we’d dared to enter the heart of Niflheim itself … 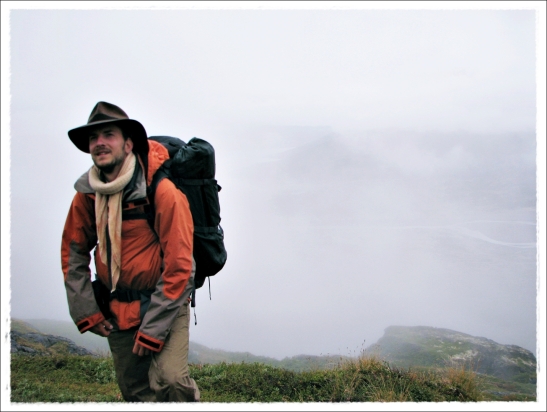 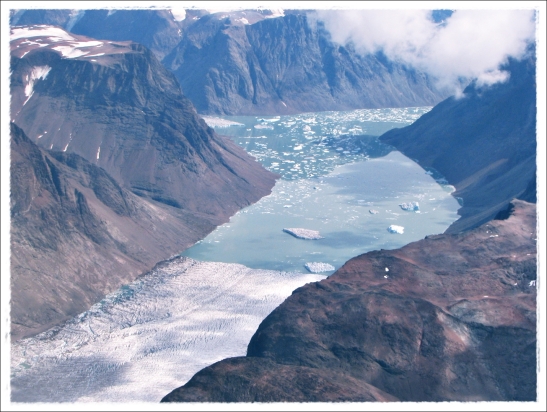 Now, look. This became a rather long letter, didn’t it. I hope I didn’t take up too much of your time my friend; really thought this kind of journey would be right after your taste.  I included quite some pictures to this letter as well as I know how much you value this kind of visual extra. So, take your time and have a look. I’m pretty sure writing again soon.

This entry was posted on March 5, 2014 by Jens in Adventure and tagged archaeology, Arctic, Greenland, kayaking, outdoors, Vikings.