Return to the ice – with kayak and paddle in western Greenland

A letter from Greenland. In which is resumed yet another kayak expedition at its rugged shores.

it’s been three years. Three years of kayaking in more local waters, like Germany’s rivers and Sweden’s skerries. All great destinations and exciting adventures on their own. But still. Somehow something was missing. A desire nagging deep inside, you know? There was nothing to argue. Of course, it was only a question of time. We had to return. And so, this early July morning we found ourselves at Copenhagen Airport – boarding that red airplane, Air Greenland’s pride and joy. Again. Destination: Greenland.

You certainly remember that in the summer of 2008 we already had taken on the challenge of some Arctic kayak adventure. Paddling at the very cradle of the kayak itself (you know, as in “qajaq” – as the Inuit of the Arctic call their narrow hunting boats). Three weeks, that summer of ice we were following Viking footprints at the southern coast of Greenland back then (I think I sent a letter from there as well, didn’t I). But this time we wanted to go farther north. We wanted to cross the Arctic Circle. We wanted to go where the sun won’t set all night.

It only takes about four and a half hours from Copenhagen to the mighty ice sheet covering the world’s largest island there, up in the north, but upon arriving at Kangerlussuaq Airport – Air Greenland’s international hub and one of only two Greenlandic airports large enough for this kind of traffic (the other one’s Narsarsuaq, just in case you wanted to know) – our journey was not yet completed. While indeed situated at the Arctic Circle, Kangerlussuaq cannot be considered exactly close to the coast. It takes another flight with some mighty noisy prop-plane to reach Ilulissat, still a bit further to the north-west – and with a population of about 4,500 Greenland’s third-largest settlement. Closer to the sea. And also closer to the ice. 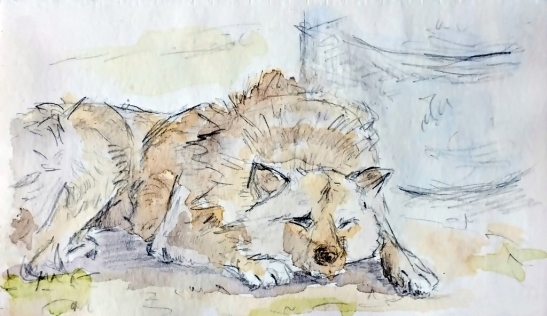 Ilulissat (which, by the way, translates to “icebergs” and is filled with the barking and howling noise of bored sled dogs in summer) is situated at an impressing ice fjord bearing the same name (Ilulissat Kangia, declared a UNESCO World Heritage site in 2004), the glacier at its eastern end being the most productive one in the Northern Hemisphere. Rumour has it, that the iceberg which sank the RMS Titanic in 1912 (I’ll bet you know the story; you saw that movie, right?) came right from here. While I admit that I’m not sure how much of this may be true, the view across this dense field of subtly moving ice – imagine!: glittering mountains, bizarre floes, bright rubble – did indeed leave me a silent awe and the feeling of nature’s magnitude and dignity. I mean, just try to get your head around this: About 20 billion tons of icebergs are calving off the glacier every year, floating through the fjord towards the sea. 20 billion tons! 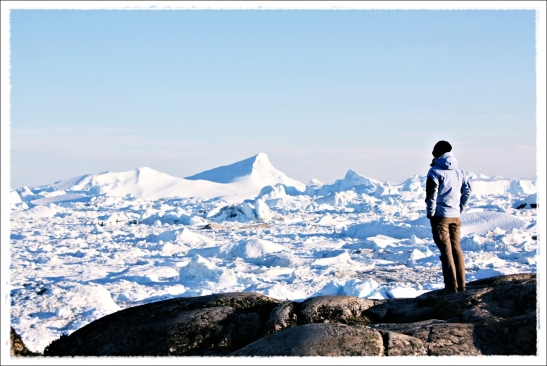 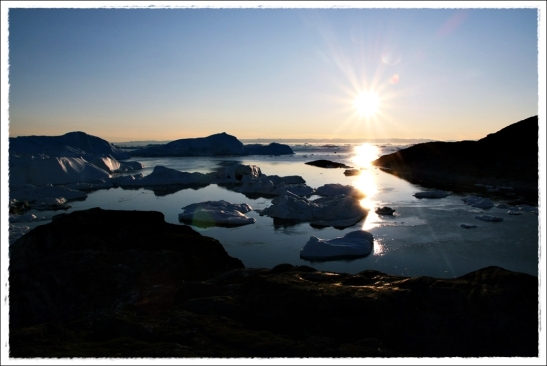 As impressing that thought and breath-taking that sight were, it still wasn’t the time to dedicate ourselves to such humble feelings as we still were not at our destination. With the help of a local fisherman named Niels and his small boat, we could finally proceed towards Ataa, an abandoned tiny settlement in the Disko Bay (which, by the way, got its 15 minutes of fame as backdrop in the 1997 movie adaption of “Smilla’s Sense of Snow” – quite some movie references here; do you know this one?). It was late at night, past 1 a.m., when we dropped our bits and pieces to the shore and disembark, but looking at the clouded yet light sky, it could have been any other hour of the day as well. The only infallible sign of the sun staying low was the piercing frostiness which drives us into cozy sleeping bags and tents apace.

The next morning was a warmer one. Some significant change in temperature which was also noticed by the infamous Greenlandic mosquitos. An insidious breed, I am telling you, not caring for your poor European repellent and strictly aiming for eyes, ears and mouth.

But honestly … coming that far, we we’re hardly giving in to some humming critters. We were determined and the kayaks waited at the water already, the fjord lying ahead. Naturally, with this kind of transportation travelling light is a basic requirement, but still – stuffing even the reduced lightweight equipment and freeze-dried food into the narrow boats and small compartments was a pretty enervating and fiddly task (one we should learn to master over the days of constantly unpacking and packing upon every arrival and departure; reducing the supplies every day also helped, of course). Finally, all was set. Well, we’re no beginners when it comes to kayaking. Not even when it comes to kayaking in Greenland. But this morning, with the new and unfamiliar boats … well. Our travel companions were just a bit too energetic by entering their kayak. They are … capsizing; while still at the beach. Which is quite lucky under the circumstance, actually. With 4°C water temperature you would not want to recapitulate this out there at sea, trust me. Forget all that stuff you read about the famous ‘Eskimo Roll’, which might (or might not) work with an empty single kayak – but with a double one, crammed from top to bottom … not the ghost of a chance. Of course, we were a bit bewildered after that stunt. To say the least. But again, coming that far doesn’t get you to surrender so easily. A moment of silence and contemplation. Another one of discussion. A first timid attempt to bring the kayaks back to water and test their as well as our abilities and limits. A bit shaky (both), unquestionably, but also becoming more and more secure with each paddle stroke. Heck, yes – we were going to do this!

So finally, slowly our small boats were floating through the water. Silent; only the gurgling echo of our paddles dipping into the water could be heard. Ice in the water. The clear air a fresh breeze. Cautiously we were progressing, paddle stroke by paddle stroke. And there it was again: this sudden feeling of solitude. Freedom. The fjord is opening before us and more and more confident we are now pushing into Arctic waters shined on by a never setting pale northern sun. Every morning, after a breakfast of hot tea and salty instant soup (from the same cup, successively; you learn to accept and even appreciate those grease drops), camp is raised and packed and stuffed into the kayaks. Again and again. Paddling itself soon developed an own ‘daily routine’ over the days and weeks. A routine of carefully circumnavigating creaking icebergs towering up like surreal frozen fairy tale castles in icy white and frosty blue. A routine all about finding a suitable spot to make new camp farther ahead at the end of the day (of course, all our stuff needs to be unloaded from the boats first) – shallow enough to disembark, dry and flat enough to get the tents up and with enough fresh water to get by (frozen water in form of eon-old glacial ice does count too). 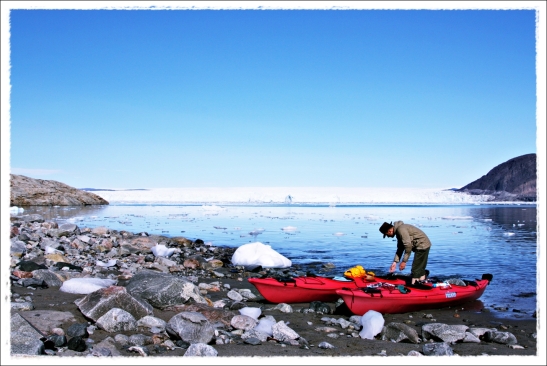 This life may appear a bit more modest, but it’s also a bit more intense (let alone that not having a mobile signal is a rare luxury in our times I assure you). The days on the water are now filled with wonder and amazement. Cheerful seals curiously peering at us from a distance; a soundtrack of crackling and squeaking icebergs playing, of glaciers at the horizon – calving with the thunder of a hundred cannons.  Majestic whales passing, waving a last graceful ‘Goodbye’ with their fluke before descending into the depth – and leaving us speechless in awe once again. Surely, threading through dense fields of ice, withstanding wind and rain, paddling through sometimes troubled waters could be an arduous venture. But this is an effort paying off! We are water-wandering a pristine landscape of primeval and almost mythic beauty. Rough mountains growing up to both edges of the fjord: rugged, steep, shadowy. Ice-covered summits, twinkling waterfalls and lakes with the colour of polished opals are engaging the urge to discover every day anew.

And while not facing a single living soul out there, except the occasionally rare fisherman in his boat, we do find forgotten traces of former human presence here deep in the Arctic wilderness: flat barrows of erstwhile Eskimo dwellings and stone-framed circles of their old burial grounds. People were living here once. The notion of a barren, hostile landscape is only half-true, fitting for the frozen hinterland probably. However, Erik the Red did not lie to his fellow Vikings when advertising this newly discovered land as a Green-land. There is a thin narrow strip of fertile and habitable land just in front of the towering perpetual ice. In particular in the south-western part of the island, where also most of today’s settlements concentrate. But that landscape, that habitat is changing. The ice is retreating.

This is a very special landscape on our planet, of a unique nature. It is a living environment after all. One worth protecting, my friend. Climate change is happening, and nature does not care if we believe this or not, if we only discuss this over and over again. In our kayaks we went up to 69° North. We have seen that change; it is becoming impressively visible. Alarmingly visible. Melting glaciers leaving nothing but polished rock surfaces and rising sea levels, whole fjords suddenly becoming clear of ice. People were talking about their winter up there, and guess – ‘White Christmas’ is not even in Greenland granted anymore these days.

A slightly different version of this text was originally written for and published at Bucket List Publications‘ travel and adventure blog as “The Other Arctic Circle Cruise – Kayaking Among Icebergs”.

This entry was posted on March 10, 2015 by Jens in Adventure and tagged Arctic, climate change, Disko Bay, Greenland, ice, kayaking.