Aquatic adventure: Diving a wreck. And its story.

A letter from Egypt. In which is told the story of a dive and retold the fate of a cargo ship.

well, if the weather becomes a bit more uncomfortable over there at our typical Berlin autumn, it seems not the worst idea to escape to some more aestival shores. So, grabbing wetsuit, diving mask, and fins I went to Egypt for some scuba diving adventure. And here’s quite something to see, I’m telling you! But again, let’s start from the beginning …

There wasn’t much more than a light breeze coming from the sea that morning when we left the mini truck which brought us to this yet still lonesome Red Sea shore. The ocean to one side, the beach seamlessly blending into the desert on the other. A bright sun at an almost cloudless blue sky already announcing another hot October day here in Egypt. A light breeze only. Apparently, completely unlike that day in June back then – about 20 years ago …

There was nothing to wait for, so we started to unload the diving equipment from its bed the moment we left the truck. Only sparse scrub was growing between the rocks at one spot alongisde, the shimmering silhouette of a village or town like some mirage in the distance. A few tarps in the sand, right there in the already decreasing shadow of the car formed a sufficient dive basis to prepare for the underwater excursion ahead of us. Something in the sand between my toes caught my eye: Hundreds – looking around, probably even thousands and more – small pieces of polythene granulate were spread all among the beach. Tiny, barely visible, mixed with the sand. That must have been it. Remains of the cargo, Saudi Arabia’s petro-chemical export hit in the early 90s – still here after all these years.

With a few experienced movements we put on diving suit and scuba gear, shouldered the heavy tanks, grabbed diving mask and fins. The pre-dive buddy check is passed swiftly – as practiced a dozen times before. Only moments later we were already gathering in chest-deep water; everyone forming a circle with thumb and forefinger, the mandatory “okay” signal – followed by the downward extended thumb, the command to descend. Air is escaping bubbling from the buoyancy compensator while we were slowly falling. We wouldn’t have to go far. Or even deep. She was right there. At the reef of Abu Ghusun, emerging from the dark waters in front of us: “Hamada”, a coastal cargo vessel which has gone by many owners and names in its history (I just looked that up, knowing you’d be interested in the smalll details) after it was launched in Aberdeen in 1965 – christened “Avocet” at that time.

To this day it is still not exactly clear what really happened that 29th of June in 1993 when she was on her way from Jeddah in Saudi Arabia to Suez in Egypt, flying the flag of Malta. In heavy weather, under a dark storm-tossed sky, “Hamada” sank that day. Descriptions of the accident’s course are differing, telling of a collision with some undersea barrier or even a fire on board (which might be a point as divers reported the discovery of a charred mattress). Whatever happened that fierce day in June back then – now she rested in a depth of only about 18 m. 65 m long and 11 m wide – lying on her starboard side, the hull broken. Propeller, rudder, and the bridge surprisingly relatively unscathed. The view into the cracked cargo bay even revealed an abandoned fork lift truck. An almost eerie scene. Dead silent … despite the steady noise of my breathing intensified by the diving regulator and the gurgling sound of exhalation. 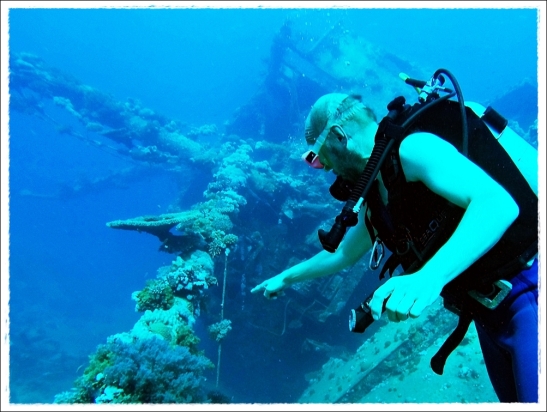 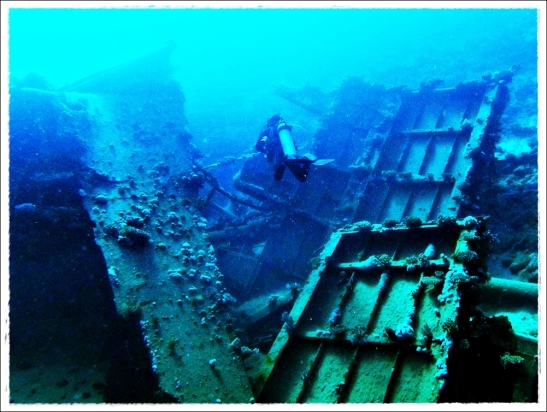 Yet not dead at all, that much I can tell you. “Hamada” turned into an artificial reef. Yet of a certain beauty: The wreck was heavily overgrown by corals already, attracting all kinds of marine life: Napoleon and cleaner wrasses were romping about; parrotfish, surgeonfish and butterflyfish curiously circling us while a grumpy moray eel was watching disapprovingly out of the shadows of his hideout. An octopus sitting on a stone – motionlessly, was trying to ignore us, pretending just not to be there, and a group of meddlesome dottybacks tried to put their noses into things apparently none of their business.

As we finally turned away from the wreck, this new biotope and its colourful inhabitants, another group of divers grabbed our spot. And as we left the water, even more fellow aquanauts arrived at the scene. Yes, this spot seemed to receive some more attention today. That’s probably what the two Bedouin women – who spreaded some pieces of jewellery on a blanket in the shadows – must have thought as well, offering their trinkets to anyone who would care. But none of the diving people deigned to even look at their display. They all went straight to the water, they all just had one agenda: Going down to pay tribute to “Hamada” …

Of course I am aware that this might be not the most spectacular wreck out there, my friend, it’s neither ancient nor hiding treasures of value. But what the story of “Hamada” can teach us, is that we are indeed always surrounded by the vestiges of past. Anywhere. Anytime. We just have to look for the them, ask for them, care for them. It’s little episodes like this which are putting the ‘story’ into ‘history’ in my opinion. Or what do you think, old sport?

3 comments on “Aquatic adventure: Diving a wreck. And its story.”